The Metropolitan Naga Water District (MNWD) mobilized relief efforts through the deployment of water lorry trucks in typhoon-stricken barangays of Iriga, Buhi, Sagñay, and some parts of Tiwi, Albay after typhoon Usman made landfall in Eastern Visayas last December 29, 2018.

Bicol region and Southern Luzon experienced continuous heavy rains which resulted in erosion, landslides, and flash floods affecting more than 200 communities. Provinces of Camarines Sur, Camarines Norte, Sorsogon, and Albay were declared under the state of calamity. Consequently, power and water supply interruptions were experienced in the affected areas, particularly in Buhi wherein the water supply system was severely damaged.

Local officials sought the help of MNWD, through Chairman Jorge T. Palma, who immediately authorized and took the lead in the relief efforts supported by the readiness of the MNWD management and staff.

Being the first group to respond, clean water supply was served to the affected families and individuals of Buhi and its neighboring towns starting midnight of December 29. Likewise, MNWD assisted in the distribution of donations organized by Tabang Bikol Movement last January 6, 2019.

In this trying times, through the concerted efforts of MNWD led by General Manager Virgilio B. Luansing I and its stakeholders, the “bayanihan” spirit has not only delivered urgently needed drinking water right after the calamity but also uplifted the communities’ dire condition. 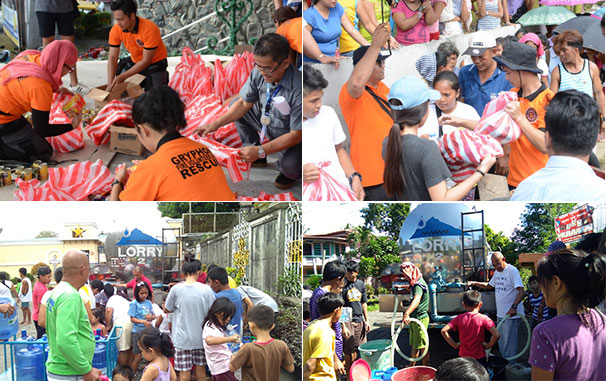 MNWD IN TIME OF CALAMITIES. Relief efforts provided by MNWD to the affected communities of Buhi and its neighboring towns starting midnight of December 29, 2018.