The Metropolitan Naga Water District Employees’ Union (MNWDEU) celebrated its 33rd founding anniversary with the induction of its newly elected Executive Officers and Board of Directors for C/Y 2022-2024, on May 28, 2022, at Champagne Garden. For more than three decades now, MNWDEU continues to forge ahead in allowing the workers’ voices to be heard and given representation within the District.

Opening with a Holy Mass, the MNWDEU arranged a pleasant anniversary lunch program for its members filled with raffle prizes and giveaways. Special guests include MNWDEU co-founder and former President Roque Francisco and Director Agileo Michael Pauig, who graced the event on behalf of the MNWD Board. They both gave a message to the members of the Union, highlighting teamwork and unity for better working performance and improved public service, which is what matters most for the consumers of MNWD.

The outgoing MNWDEU President and Treasurer gave their respective reports as to what the organization has accomplished in the previous years. MNWDEU President-elect Teejay Altair Tormes spoke on behalf of the outgoing officer, Bernardo Francisco, Jr. While Apreil Majam, outgoing treasurer, presented her report on the Union’s financial matters during her term. Certificates of Recognition were then awarded to the outgoing officers and board members.

As for the induction ceremony, the newly elected executive officers and board of directors took their oath conducted by Auria Primaverde Gonzales, Head of MNWDEU Commission on Election. The lineup for Executive Officers include: Teejay Altair Tormes (President); Pedro Prima, Jr (Vice-President); Regine Clare Dela Rosa (Secretary); Richard Remollo (Treasurer); Eugene Curba (Auditor), Wilson Alayan and Daniel Garcia (P.I.O). Meanwhile the MNWDEU Board of Directors is consisted by: Ferdinand Capistrano, Marlon Chris Castor, Bernardo Francisco, Jr., Loningning Papa, and Cherry Grace Regmalos. They will be in position for C/Y 2022-2024 and are tasked to work for the best interest of the Union and its members. The program ended with Chairperson of the MNWDEU Anniversary Committee, Claudette Salvino, extending her warmest appreciation to all the members who were present at the event. (YMMSavilla)

The MNWDEU members during the holy mass, celebrating the Union’s 33rd founding anniversary. 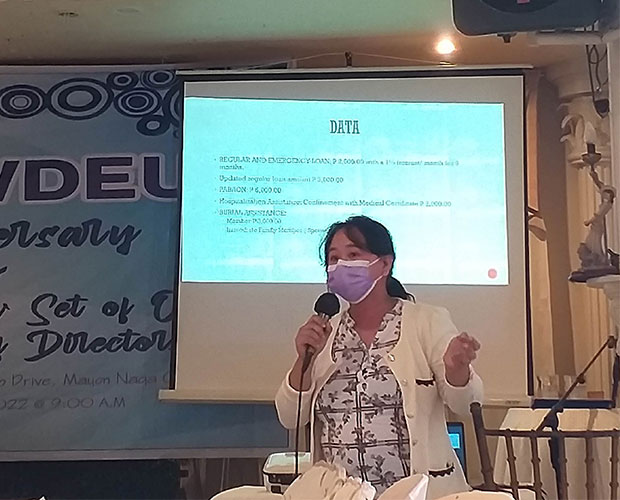 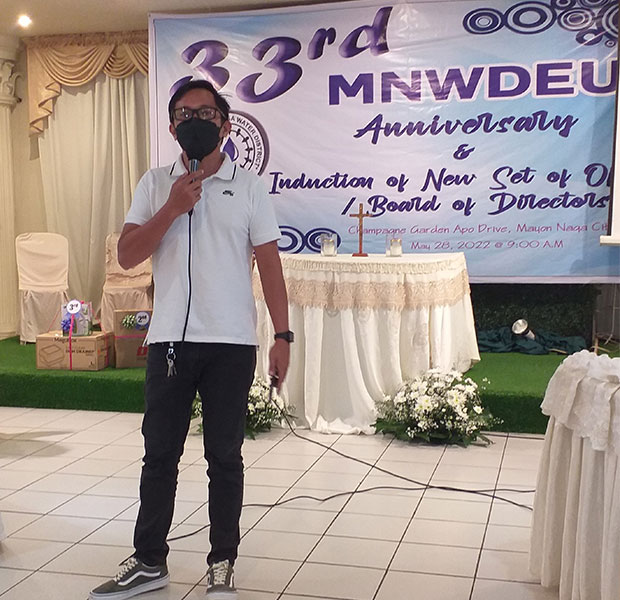 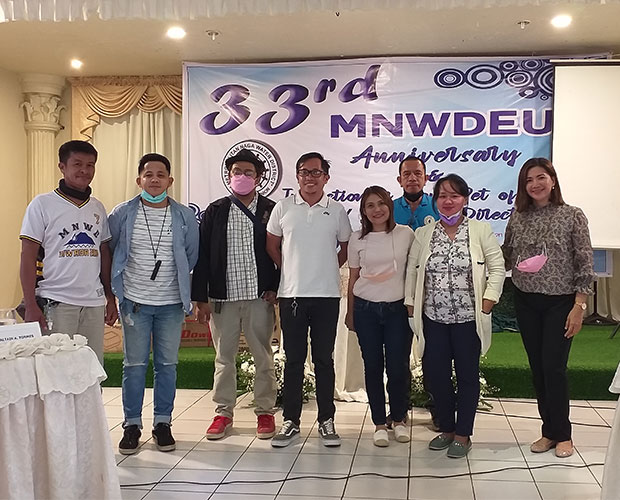 The MNWDEU outgoing officers were given recognition for all the efforts which they dedicated for the employees’ union. 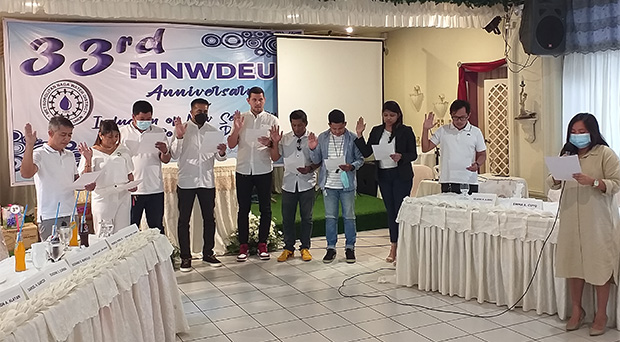 Oath taking ceremony of the newly-elected executive officers and members of the board, conducted by Auria Primaverde Gonzales, Head of MNWDEU Commission on Election.